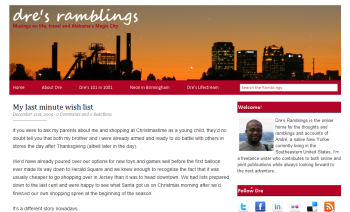 It’s only taken two years, one false start, one meltdown and a few cups of coffee to get to this point, but now I’m excited!

If you’re reading this post via the RSS feed, you’ll want to click through to read the post on the site itself, since today I’m showing off most its long planned redesign.

See, I have this weird belief that 2010 is going to be the year of the return of the long format blog post. I decided that finally working on a new design focused on being an online journal and watering hole needed to become a priority.

It also doesn’t hurt that come July it will be five years since I jumped onto this virtual bandwagon and I thought it was time for a change in the look and feel of the site (though not a major one).

I used Chris Pearson‘s Cutline theme as a jumping off point but I wanted the site to be just a little more dynamic than it had been in the past.

That’s why you’ll find a lifestream accessible from the navigation bar and (in the coming days) you’ll notice that the sidebar will change depending on where you are (there may even be an ad or two depending on where you land). You’ll also start to see some other sections of the site come back to life – including a neon sign or two every once in a while and a march to complete creating and carrying out the items on my new 101 in 1001.

I’ve learned a few things in working on this project. First of all, if you’re using Internet Explorer 8, you have to click on the Compatibility View button (located to the right of the address bar) in order to view it as designed. I’m hopeful that I’ll be able to make the necessary changes to the theme shortly after the start of the New Year to make that extra step unnecessary, but you never know.

I also figured that this site needed to once again serve as my electronic front door – a place where folks could get a taste of what’s on my mind without necessarily having to hop all over the Internet to do so. I’ll write about Birmingham here, though probably not with the frequency that you’ll find over on The Terminal starting in January. Hopefully you’ll enjoy this unfiltered version of me and the stories and opinions that I’ll get to share with you.

I got some help with actually carrying out the theory behind this crazy thing from fellow Shift Workspace member Brit Mansell of Octane Media. I also appreciate the help of one Mitch Canter (a.k.a. @studionashvegas) and Brandon Sheats as they listened to the rants as things worked or didn’t work.

Stuff on the web is supposed to always be in beta. That’s definitely how I’m approaching this site since it’s far from being finished. But I’d love to hear what you think about it and if you’ve got any ideas for layout or posts.