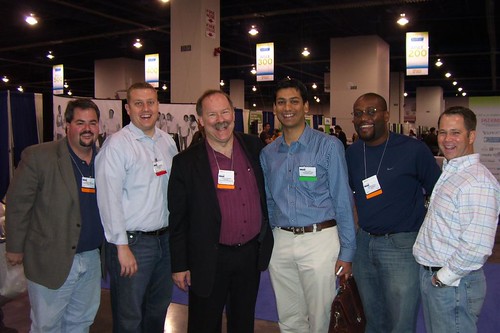 It took longer than I planned, but this installment takes a look at a few people I’ve been lucky enough to meet in person when I first dove into the world of social media and blogging head on in Las Vegas at BlogWorld Expo.

This is a case of actually meeting a person completely online first as a result of responding to a LinkedIn question. In this case, it was one seeing who was going to be attending the first BlogWorld Expo back in 2007 (where incidentally I also met Jason Falls of my first list of suggestions). Chuck and I ended up hanging out for most of the conference and had some really cool conversations. We also had the chance to enjoy a sneak preview of The Kite Runner before its official release – a post that I’m extremely overdue to write as it was one of the more powerful films I’d had a chance to watch.

Now it was only after I answered the question and had corresponded with Chuck’s that I took a look at his LinkedIn profile out and realized that he was the communications director at iContact. Some of those conversations ended up being about the use of e-newsletters and other online tools for outreach. I also realize that we were barely scratching the surface about the subject of his soon to be published book, Linking in to Pay it Forward, and his blog, The Pay it Forward Chronicles. I’m still trying to figure out when I’m ever going to end up at one of his LinkedIn Live events in Raleigh…

You think that there’s a theme coming in this one, but it’s honestly just because I got the chance to interact with so many folks back in 2007 in Las Vegas. I met Rachel and her husband Scott during the conference and credit them for my first encounter with Jason and Chris Brogan. It didn’t hurt that they were both native New Yorkers, meaning that we had a lot more to talk about than most. We’d all talked about meeting up for BlogWorld again the following year.

While planning for last year’s WordCamp here in Birmingham, I decided that it would make more sense to visit San Francisco for the big one out there than to return to Vegas. Rachel and Scott let me crash on the sofa and hang out with their cats too. I’m still grateful for that generosity, especially with it being my first trip to the Bay Area. I’m hoping that one day I’ll get the chance to return the favor if something ever brings them out here to Alabama. I’m also looking forward to some great tweets from this year’s WordCamp SF. If everything works out, we can hang out in Las Vegas and see what this newly merged Blog World/New Media Expo looks like. Hopefully, she’ll get a chance to slow down and come on out for it.

I’m not quite sure if my description of Brett will do him any justice. The coastal boy in me is still jealous of his office on the lake (yes, I said ON, not next to, the lake). He’s got a lot of energy, which is representative in all of the things that he keeps his hand in. We actually started to talk more after we left the conference than we did while in Vegas. He was the first person to volunteer to speak at last year’s WordCamp – coming over from North Carolina. He’s getting ready to make the trip again in late September, always willing to take a trip and share, knowing that he may learn a few things himself along the way. If you’re in NC and can’t wait until September to meet him in person, WordCamp RDU is coming up in June and he’s speaking there too.

The conversations were ones that helped figure out a long term direction for The Terminal as well as being someone who reminds me that I do all of this writing because I enjoy it, which is especially helpful when I’m hitting my head up against the wall.

I’m going to stick to my format of Follow Friday blog posts, especially after some of the recent changes made to Twitter and hearing some of Micah’s thoughts on the matter too. Enjoy!

You know, I think I met you and Chuck the same night if I'm not mistaken (at the Rainforest restaurant or something). I haven't stayed in touch as much as I would have liked and need to catch up with him for one of his events as well.

Talk to you soon, and can't wait for WordCamp to get here. (Blogworld too for that matter!)

You know, I think I met you and Chuck the same night if I'm not mistaken (at the Rainforest restaurant or something). I haven't stayed in touch as much as I would have liked and need to catch up with him for one of his events as well.

Talk to you soon, and can't wait for WordCamp to get here. (Blogworld too for that matter!)