Getting funky at last night’s Art on the Rocks! 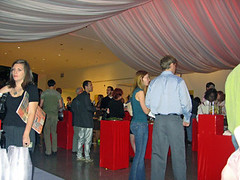 Last night the Birmingham Museum of Art began its second year of it's wildly successful series, Art on the Rocks, with what many would argue was a more diverse group than would normally attend. Look at yesterday's post to view a story talking about the phenomenon and how it has grown in an extremely short period of time. The museum becomes transformed into a large club, where it was an opportunity to see and be seen by the metropolitan area's young professionals. The last minute addition of American Idol semifinalist Taylor Hicks to the festivities, though he did not perform, brought out many fans that may not have been aware of the monthly gatherings at the Museum. Hicks himself had already had a very long day, as seen in some photos posted early yesterday afternoon after a parade held in the Birmingham City Center in his honor.

Those that decided to stay at the Museum after Hicks left for to return to Hollywood were not disappointed in the performance by Ivan Neville's band Dumpstaphunk. Those that left early upset that the Idol did not perform missed an incredible show. The band filled the streets of the city's cultural district with funk and definitely led to a great start for the summer season. All in all, a great show. I wish I had better pictures. Clicking on the image at the top of the post will take you to the blog's photostream, where there are a few more pictures from last night.