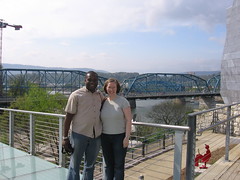 Feeling compelled to begin my list of tasks (and not compelled to do spring cleaning), Bets and I decided to hop in the car and spend a half-day in Chattanooga, TN (#16). The trip reminded us of the short drive to Charleston that we used to make from Savannah. This is now even a faded memory for those that live there due to the dropping of the speed limit for a significant portion of the trip. Anyhow, for a city that was once known as America’s dirtiest city, the Scenic City of Chattanooga has definitely emerged from that cloud, everywhere you look. Here’s the link to the Flickr set, including pictures of Betsy, since I realized that I don’t think any of them are posted here on the site.

Most notably for me was being close to water again. Living in Birmingham is the first time that a river has not been within striking distance of the central business district and as a result, available for walking all of the time. It was a relaxing escape from the recent warm weather. We did not do the Aquarium or the IMAX theater; we did just walk around first, checking out the follies and installations around the Hunter Museum of Art and the River Gallery. We traveled across the Walnut Street Bridge and looked over at the Market Street Bridge as efforts to restore the bridge continued. We enjoyed both sides of the riverfront park and decided that I may have to modify my rock climbing to bridge support climbing. Then we decided to hop in the car and drive through the UT-C campus and check out the Fort Wood historic district (yeah, we’re still building geeks at heart). I even found a way to find their old ballpark into the trip, and to see part of an Ohio State softball game (insert applause from Betsy here).

The connectivity of the downtown area was incredible. Electric trolleys allowing you to park and ride were pleasant. Their recent and future developments in the Southside of town makes it a great place to see examples of what some people think sustainable development is. There are a couple of shots in the set that probably say more than I can here. Betsy was most captivated by the bridges that inhabited the area around the aquarium covered in plantings as well as all of the older buildings that we saw while just wandering around. We also enjoyed going to one of their newest restaurants, The Blue Plate. It was pretty interesting; an organic based menu with views across the river no matter where you sat in the place. It also had a full bar and flat screen TVs. They said they’d just taken off the training wheels earlier in the week, but it was still a great space. Hopefully the site that they’re working on will express just how cool a space and a menu it is.

It was a great trip to clear a mind of clutter and think about what else is to come. The chance to come back and look at a city with different colored lenses. It was also nice to do something without knowing what the true result would be. Most of my trips out of town since I’ve moved here have been with a purpose in mind: an event, a race, a meeting. “No expectations” is a good feeling. It’s also a great way to begin tackling the list. Hopefully I won’t bore you too often with the online reports of these activities. I’m just satisfying that sense of adventure that never seems to want to run away.