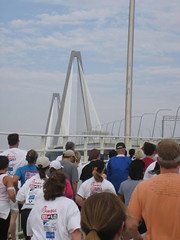 This is a great representation of the race. For more photos, click here to view the Flickr set. Definitely one of the more interesting runs I've ever done. The idea of having the runners and walkers start at the same time from the same place was scary and silly when looking back. But it was still a lot of fun, especially enjoying the views off the bridge and the running bananas (it's a long story).

Always interesting are the numerous stories that you hear while waiting in line. Adrian and I were in line with a young woman who was recently engaged and she'd lived in Charleston for four years. She felt the need do it at least once before she left because she wasn't sure if she'd ever get another chance. I spoke with another guy at while looking for Adrian who did something similar to what I had; he'd run the bridge last year since it was the last time to be able to do it over the original; then he ran this year just to say he'd taken part in the first group to do it over the new one. Both of us had a great time, though we agreed that the race will always be one of those evolving efforts. It will probably have to become more like a Peachtree Run as it continues to grow, as it is not hard to imagine 50,000+ tackling the bridge next year. It was interesting to see all of the people who came together for the fun of saying they "Got Over It."

If you want to know how we did, click here for my time and here for Adrian's. Not our best times, but we agreed just finishing was more fun than trying to get through the masses. I'm hoping they separate the groups again next year. It may also be good to finally begin to stagger the start time. More than 47,000 people from all over the world participated in the race on April Fool's Day.
Enjoy!