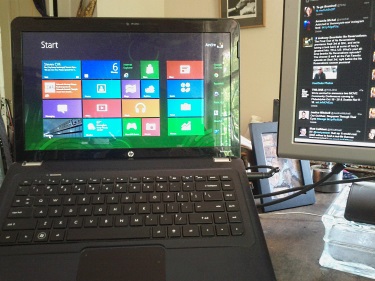 I’m probably about to get my geek creds revoked by writing this post, but it doesn’t matter. I haven’t had them for that long anyway…

I’ve already been using an evaluation copy of the Windows 8 Release Preview for the last 2½ weeks and I’ve had little if any problems. I like it. I even liked it before the somewhat cheesy but informative videos started appearing online. It does what I need it to do. Its start up time is faster than it was when I was using Windows 7. It’s only crashed twice in that time frame and it was as I was asking it to shut down. At one point it was persistent in making me aware of the Shockwave plugin not working properly, forcing me to acknowledge the problem (and getting the browser to respond much faster after I did). It has my laptop behaving more like it should and less like one that needed to be replaced in the near future.

I enjoy being able to access the taskbar via the second screen, making it a little easier to launch additional programs when I’m at home.

Last week’s announcement about their new Outlook.com product kind of sealed the deal for me. It is a clean interface that makes it easy to focus on the message you’ve received. I do wish it had some of the tagging functionality of GMail, but I’m thinking it may come over time. It may also be a sign of what we should be expecting from a reinvigorated Yahoo! as it attempts to regain its public footing. Apple has proven that design matters over and over again. Microsoft’s just taking a valuable page out of their book – and we’ll be the beneficiaries.

It’s supposed to be more of an issue of what makes sense to use than of how it looks, though. After years of getting it wrong, I think Microsoft has finally gotten it right. For someone who cannot easily afford a Mac laptop, I now have an operating system that works for me – not one that frustrates me to hell. The most telling factor for me – I have not had Chrome or Firefox (well, actually Waterfox) crash once since installing the preview (as I start knocking on the wood desk in front of me).

I’m thinking there are a lot of others looking forward to what this new approach from Microsoft means – for their productivity and their pocketbook.

Then again, some of us still think that webOS has a chance when it officially goes open source in September. You never know…