Pushing out of the box 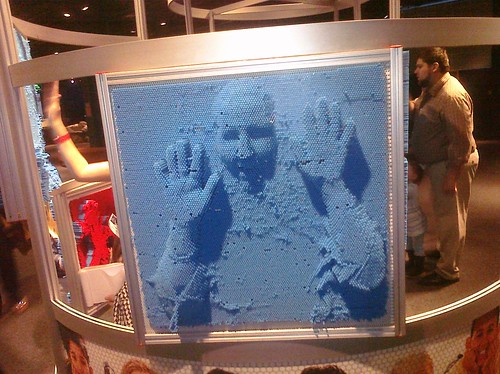 How often do you go out and explore your own back yard?

It’s one of those things ingrained into most New Yorkers; I’ll admit that we’re nosy by nature. The years in Savannah and the adventures that resulted from being curious there didn’t necessarily keep that need to look around the corner at bay when we first arrived in Alabama either. Things had changed though…

Last weekend Betsy and I did something we had not done in some time – we got dressed up and went out for the evening seeking adventure in Birmingham, AL.

A friend of Betsy’s let us use a couple of tickets to the annual Beaker Bash fundraiser for McWane Science Center downtown. Now I’ve not spent as much time wandering the McWane Center as I thought I would have already. The crazy part is I’ve spent more time there since I moved from downtown than I did when we lived as close as three blocks away.

As you can tell from the photo, Betsy had a lot of fun pretending to be Han Solo. From what we’d read and seen about past years, the event had previously been one where adults could be kids – well, kids dressed up in lab coats and given the chance to explore the former Loveman’s Department Store without young people wandering around with you. This year, children were allowed, with many of them dressing up like their favorite superheroes or movie characters. This meant that I met several Darth Vaders, Jedi and Harry Potters.

The main result of this change was that those folks looking for an escape probably didn’t find it among the youth in attendance. I was looking for even a slightest opening for a reason to recharge my batteries while there. Seeing Batman playing with the magnetic fields on the motor exhibit and the Men in Black lying down on beds of nails helped me do just that. Those parents who finally got a chance to attend the event because they could bring their children enjoyed the event as well.

The underlying personal mission of exploring the city is one that seems to have faded into the background the longer we’ve lived here. The crazy thing is with more than five years into this adventure of living in Alabama’s Jones Valley we both know that we’ve barely tackled the tip of the iceberg.

One thing I’ve realized recently is we were more adventurous when we had fellow expatriates to hang around and explore with (something hinted at in last night’s post); the journey was one that meant that you didn’t quite know what was going to happen next. Finding a new crew of folks seems to be just a little tougher than I first thought, but I’m still holding out hope. In the meantime, former members of that crew provide escape hatches across the country – all of which I’m grateful for.

That seems to be the question that holds the key to how much more excitement can come from living in Birmingham, AL for the foreseeable future.

What seems to keep you from exploring your own back yard?