Sometimes it pays to be a member…

Or rather there are some really cool benefits. An e-mail that arrived in the inbox yesterday evening announced that the ONB Magic City Art Connection is presenting an e-Art Loan program. Similar programs have become quite popular in other cities, where people are able to enjoy art in new and creative ways.

Entry into the contest is limited to members of Catalyst, TechBirmingham and the Junior Patrons at the Birmingham Museum of Art. 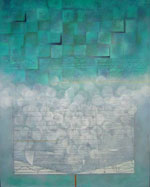 A new piece of art will be featured bi-monthly according to the contest site on al.com, with the drawing for this current piece, Petition Series: In the Morning… by Peter Whitting of Pikesville, MD, (pictured to your left) being “loaned” on February 23 with the feature announced on March 1.

Other organizations interested in participating in the art loan program are invited to contact ONB Magic City Art Connection director Eileen Kunzman at 595.6306 or via e-mail at [email protected].

This would also be a good place to mention that if you’re not planning to attend Cool School this evening, or if you’re just not quite ready for Mardi Gras/Carnival to end, that there’s a little party going on at the Museum’s new Alabama Folk Art Gallery at the Young & Vann building downtown this evening beginning at 5:30 p.m.