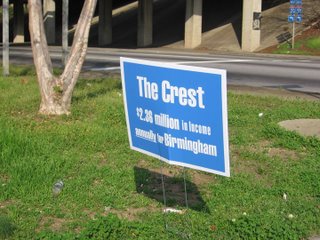 I was driving around greater Birmingham over the weekend and began to notice small blue signs placed near interstate exit and entrance ramps and at major traffic intersections. The picture to the left is one of two located at the end of the exit ramp for Airport Blvd. off Interstate 20/59. The signs were associated with The Crest, a project proposed by Barber Properties to inhabit a prominent location on Red Mountain to take advantage of view of not just Jones Valley (downtown Birmingham) but the area to the south as well. Philip Jordan at Birmingham Weekly wrote this piece about the final vote on the project that took place at the January 17th City Council meeting. These signs state that The Crest would provide $2.36 million annual for the city of Birmingham. In relatively small print (the type that cannot be easily read while driving) the words “in income” appear next to the previously mentioned dollar amount.

There have been numerous references made to the argument that the Redmont Park neighborhood’s historic architecture should be preserved. Good point. There have also been statements made about the impact that it would have on that neighborhood’s traffic problems. Definitely a major concern. I would love to present one of the more compelling arguments that has not been readily made as of yet: the fact that we already have tons of residences and apartment buildings, whether they exist from the 1920s with courtyards to the 1950s (with… well they exist) already standing throughout Birmingham, AL.

My last post dealt with Mt. Laurel; one of the issues brought up was the idea that while New Urbanism in theory is great, it is a shame that it is not practiced in existing urban environments and instead applied on blank canvases. Despite its greatest intentions, I would argue that the same annual increase in income to the City of Birmingham could be achieved by moving into existing structures or by bringing back existing neighborhoods rather than creating new ones. Risk is not something that is associated with great wealth. However, those willing to take a “risk” are needed now as this city continues to enjoy being rediscovered. And it is already being rediscovered. The idea of asking “When is it coming?” is long over; it should now be, “How do I do my part or get involved in the process?”

Developing an edge city rather than helping to bring back some inner city neighborhoods with strong character may only lead to further feed bad feelings about the city. I am somewhat biased on this issue: I live in Central City Neighborhood in the heart of the city and my job is focused on bringing back older commercial districts throughout the city. There are gems that sit throughout the city, waiting for interested parties to come forward and lead the charge towards where most people want to go: upward and forward. I’d rather stay and fight another day for what I want in my still newly adopted home instead of packing up shop and thinking that it’s beyond hope. That same income could come in and really become part of the city rather than being perched on high looking down into it. I’d love to see private dollars go towards moving people into the core.

Considering that all of the existing current avenues for approval have been exhausted, except for civil court, it will be interesting to finally learn why these signs have suddenly appeared throughout the area.

Let me know what you think.

What do I think? I think you're right. As usual.

Several years ago my in-laws moved to Ulster County New York. When I visited for the first time, I saw signs everywhere that said "Save the Ridge." I guess they were sort of the opposite of your little blue sign, in that they opposed a plan to clear space on the ridge for 349 homes and a golf course. The signs were put up by these folks:

And guess what? They won! From an AP story:

GARDINER, N.Y. (AP) -- New York will expand the Minnewaska State Park Preserve with the $17 million purchase of a prominent piece of land along the Shawangunk Ridge, state officials announced Tuesday.

The 2,500-acre parcel in Ulster County was sold to The Trust for Public Land on Friday and immediately resold to New York state for the same price, according to trust spokeswoman Susan Clark.

The sale was considered a coup for environmentalists since it came just years after plans to develop the ridge land were unveiled. One conservationist called the parcel the "holy grail" of the Shawangunks and Gov. George Pataki said the sale ensures that "one of the great treasures in the Hudson Valley" will be available for future generations.

There are some examples of "TND's" (Traditional Neighborhood Developments) being built in downtown, true urban areas.

It's just that when an urban area is revitalized and returned to its live/work/play/shop glory, it still looks like a city. Which is fine, because that's what the "new urban" designs built in the suburbs are supposed to look like.