Leveraging the food we’ve got downtown 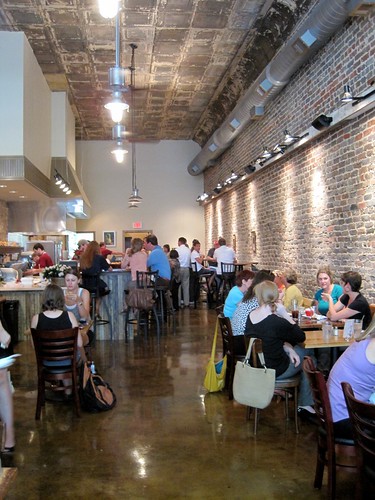 I will admit up front that I wasn’t able to attend the Sidewalk Moving Picture Festival this year. It’s the third year in a row that I’ve not enjoyed sitting in the Alabama on a September evening…

My previous post only hints at one reason why I didn’t make it (which I hope to go into more detail about in the coming days). The other reason involves the TSA thinking that a camera monopod could be a weapon, leading to spending more time at O’Hare than I thought possible…

It is about this time that we normally see reviews and comments about the festival. One of the comments I stumbled across this year via Facebook was one by Wade Kwon suggesting that the festival was still “stumbling on food vendors.”

The food vendor issue is something that shouldn’t be much of a problem anymore just because I think that Birmingham’s city center has turned the corner in terms of places to eat with even more coming in the near future. It is something that has several solutions, but finding one that folks are comfortable with remains key right now.

The main problem with our new crop of  restaurants may be convincing the owners that staying open late (and on Sunday) on one of the busiest weekends in the downtown area makes sense.

In the six years I’ve been living here, we’ve never seen a bigger potential selection of restaurants within 5 blocks of the festival’s main scene. Yes, I think that people can walk five blocks to grab a bite to eat. Establishments like Rogue Tavern, Urban Standard, Brick & Tin, Trattoria Centrale, and Brannon’s could easily see a weekend of cash registers ringing. It would take some coordination between the restaurants and the festival, but it would be an incredible addition to the weekend. Given the apparent success of the city’s inaugural restaurant week, it is possible and would allow those visiting as well as those who don’t normally venture downtown to see all that is available. They could even have a limited menu set up of easy to prepare foods that would not keep moviegoers from missing much of the festival just because they were hungry.

One thing to point out is that Birminghamians don’t seem to like to walk that far; natives and transplants alike will circle blocks for minutes trying to limit their exposure to their feet touching the pavement as much as possible.

It’s interesting to point out that there are film festivals in urban areas, most notably the Tribeca Film Festival.

The Sundance Film Festival also suggests exploration (though probably calling Park City urban would be a stretch for some).

This may be a case of Birmingham not liking to walk more than anything else. Given the excitement surrounding current developments in and around Railroad Park, that should fade soon (though we’re still in for a few years of folks don’t necessarily want to wander too far away from their next potential film – or anything else).

What do you think?

There are indeed lots of great restaurants close to Sidewalk venues, but at least one of the ones you mention is closed on Saturday, and nearly all are closed on Sunday. Part of the problem is that downtown restaurant owners see themselves as catering to an office-worker lunch crowd and don't acknowledge (or know about) the fact that people are around at night. Brick & Tin began serving a special tapas dinner menu last Friday...but it's only on Friday. What kind of restaurant isn't open Saturday night?

I don't believe the problem is that film fest attendees don't like to walk. I believe the problem is the very limited time between screenings. If you have to walk 10 blocks round trip, plus have time to eat (some or all venues don't allow outside food), you risk being late to the movie and missing part of it or being shut out entirely. It's not practical given the tight timeline to wander off for food AND see movies on time.

If you asked Sidewalk organizers, I bet they would say that catering and booth or tent setup by restaurants has for some reason proven to be a money loser, believe it or not. Not being a restaurateur or caterer, I can't speak to the economics, but I don't blame owners if they would risk losing money on a 2-day operation.

All that being said, as a 12-year attendee, I'm tired of packing snacks and starving during most of the day, only to wait in a long line at the Lyric (or run off to Pete's) for a hot dog which still must be wolfed down to make the next screening. A concerted effort, as André pointed out, could make it a win-win situation for restaurants in the vicinity, but again, it requires good publicity and coordination.

The Sidelot was Sidewalk's attempt to accommodate hungry fans, but the parking lot rented space fell short in several ways. While the music went on as scheduled, sponsor booths were mostly empty and the food/beverage tent arranged by Robbie Yarbrough had no food as late as 2 p.m. Saturday. (Some rain on Sunday also made it a less-than-desirable place to grab food.) I believe Sidewalk would point the finger at the vendor, but ultimately someone has to take responsibility for a glaring oversight.

I love Sidewalk, but I would love it even more if food weren't such a challenge every year.

Birmingham Artwalk made a conscious decision to rely on Birmingham's existing restaurants for food options this year. For one we felt there were finally enough options to satisfy the audience within walking distance (and what constitutes walking distance in our city should be post all its own). Two - the logistics are a pain and the outside vendors like to complain if they don't think they got their fair share of customers.

From the festival's perspective, we are trying to create the best experience for all of our audiences, but I care most about the attendee. A top priority has always been that they have somewhere to purchase food and beverages. In 2001, there were far fewer options, so we were compelled to bring in outside groups.

Regarding which restaurants can benefit from these types of events and stand to make the most by staying open late or on Sundays, a lot has to do again with proximity to where the people hang out. For both festivals the restaurants and bars nearest the prominent venues will get the most play - hence Lyric and Speakeasy should have a "Top 5" weekend during every Sidewalk Film Festival. They won't do nearly as well during Artwalk. For Artwalk, Urban Standard and Rogue Tavern have played a big part in making 2nd Avenue the place to be during the festival. It doesn't hurt that 50% of the artists occupy the buildings and parking lots around them.

And Erin - Rogue Tavern adapted its menu and offered the To Go option after being overwhelmed by demand in 2009. By the way, I saw the owner of the bar serving those burgers! I agree... Brilliant!

I believe that we have to keep building on the momentum - Pale Eddies Pour House will do well next year and hopefully there will be more than Domino's available at the Railroad Park in the near future.

I always preferred eating inside at Chick-fil-A (though I know this isn't exactly "local flavor") or Sneaky Pete's to escape the heat of City Stages.

We went to Rogue during Artwalk, and though no tables were open, we got their hot dog/chips:coke for $5 - brilliant. I'd love for more downtown restaurants to stay open and also consider quick/to go food during festivals and events.

The Lyric Hot Dogs and Grill joint killed it on Saturday. I'm not sure if they were open on Sunday, which they would have been crazy not to open on Sunday.... just fyi

I also popped into Rouge Saturday night and I saw quite a few red volunteer shirts. I hope next year maybe the festival can officially declare these restaurants as official vendors, and the bands can perform at the different eateries to attract folks.

Because of the weather, the Sidelot did not work out very well. It was a great idea if we had the nice fall weather that we were supposed to have, but instead it was either very hot or wet. Which, we can't blame the organizers for the weather.

I also think the food trucks would work very nicely for this event.