A slave to technology 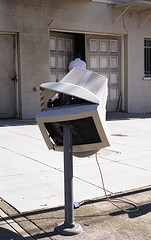 Technology is supposed to make life easier. Instead, it seems to make you more dependent on things that you weren’t originally.

In the last few months, I’ve also learned of the irony of when technology decides to fail – exactly when you’ve become most dependent on its existence. It also seems to happen when money is not available to replace it.

The latest victim is the television. One of the luckier purchases that I’ve been a part of, the HDTV that we got for 60% of the actual cost 3 years ago decided that it wasn’t going to show pictures from our cable feed anymore last night. Now that we’ve figured out that the problem is the TV and not the cable, it has now become nothing more than a very heavy paperweight. The same could be said for the old stereo (can’t use the tape deck – but then again, who does nowadays anyway?), the elliptical trainer, the iron (yes, wearing wrinkled shirts is just not the same), the keyboard for my old desktop (just died one day – midway through a post as a matter of fact) – and my favorite watch (though we’ll get that battery replaced one day – when a steady income again graces by bank account with money).

The ability to see just how much the world doesn’t end when things like these break (well, except the iron) is something that many of us don’t get to enjoy. Sometimes the joy of sitting in silence or realizing just what some of those things that sit in the house unused (like the guitars) make you appreciate a simpler way of life. I’m actually trying to figure out how I’m going to get the bike tuned up in the near future. $4 a gallon is a major reason for it, not to mention the inability to get the car repaired, but as I wrote very early on, it just seems like the right thing to do.

This weekend would be a good weekend to pay attention to what’s going on around town and stay disconnected, though next Saturday sounds like it should be the day that we really unplug and unwind. This weekend calls for my first visit to Corks & Chefs at the ONB Magic City Connection downtown – followed by cleaning during rainstorms so we can actually see our loft. Next weekend I’ll follow the lead of many web workers (and world citizenry) and unplug for the day (a little more ambitious than the one hour suggested here) – still not sure about the cell phone; never know when Mom may feel like calling or friends decide to text me about the Spurs game…

So I’m curious, what do you do to unplug and unwind?

I’ve got my own ideas for such a task here in town. Whether it’s hiking at Ruffner or figuring out just what the yupsters are doing out at Mt. Laurel, there’s always something going on, despite the belief that we’re a little on the quiet side. Hopefully you’ve got some ideas too..