A few quick things on this Presidents’ Day: 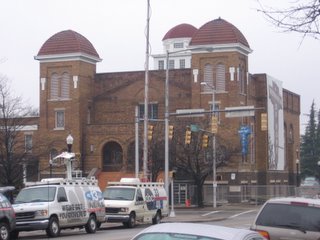 This is a shot taken outside of Sixteen Street Baptist Church earlier today shortly after ceremonies officially placing this grand structure on the National Register of Historic Places concluded this morning in downtown Birmingham. “Let Peace Prevail All Over the World.”

An update on the “young professionals summit” progress:

I’m wondering if anyone has any information on the history of the old Birmingham Council of Clubs. I learned of their previous existence over the weekend and would like to know if they are still active or if that group needs to be reactivated.

My friend Tom diAsio passed on some information to me about the upcoming edition of Speaker’s Corner Birmingham. The group is working with the UAB African American Studies Program to present the film Favela Rising this Wednesday, February 22 at the Mary Culp Hulsey Recital Hall (950 13th Street, South – next to the Alys Stephens Center) on the UAB campus. The screening will be followed by a panel discussion on crime and poverty that will include the film’s director/producer/magician Jeff Zimbalist. This film was screened at the 2005 Sidewalk Film Festival, winning the Audience Choice Award along with accolades at other film festivals around the world. To learn more about the film, check out it’s website at http://www.favelarising.com

Finally, the organizational meeting of the Friends of Ruffner Mountain that I mentioned last week will take place this Saturday evening beginning at 3 p.m. at the Nature Center. Post questions if you have any about that and I’ll see what I can get done about answers.